My dad was a huge fan of Laurel and Hardy. He passed that love for the comedy duo on to me and my siblings and we, likewise, passed it down to our kids. It’s not unusual to hear, at any family gathering, a line or two or twelve from Laurel and Hardy sprinkled into our conversation.

One of my dad’s favorite lines, and by extension a favorite of the entire family, was “Well here’s another nice mess you’ve gotten me into.” My dad would use that line whenever he found himself in an unpleasant, though usually not uncomical, situation, usually brought on by something he’d done himself.

Hardy uttered the phrase to Laurel, literally dozens of times in the movies and shorts the duo made, to express exasperation with an unpleasant turn of events. And though he blamed Laurel, Hardy was almost always equally or entirely to blame for the situation.

I was reminded of this line not long ago when Rob Langer, Benji Shepherd and I were interviewing Ebo Elder for The Finding Joy podcast. Ebo relayed the story of the first time he was going to speak publicly about his testimony. It was at a church in California and several thousand people were in the audience. Backstage Ebo became frightened at the prospect of standing in front of so many people. So he prayed, “God, please get me out of this mess.”

Ebo continued the story by saying, “And the Lord told me, ‘I put you into this mess.’”

Ebo’s reaction to a situation outside of his comfort zone was pretty typical. And Hardy’s reaction, blaming Laurel, is also fairly normal. We don’t like facing those challenges and we certainly don’t want to believe that we are responsible for bringing them on ourselves.

We are going to face unpleasant situations, trying circumstances and difficult times. Some of them will because of something we’ve done ourselves while others will be the fault of someone else. Yet all of them will present an opportunity for us to not only grow in our relationship with God, but some will have been engineered by God Himself for that express purpose. 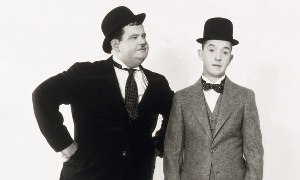 The Bible is full of stories of people who faced situations that put them outside of their comfort zone, challenged their faith and sometimes threatened their lives. In many of those stories the person’s reaction was similar to what ours would have been, they cry out, “God, get me out of this mess.” Sometimes God did deliver the person. More often, the Lord simply provided the strength and courage to face the challenge head on.

Esther was a Jewish girl in exile. She came to the attention of the king and eventually married him and became queen. One of the king’s chief advisors had a plot to have the Jews all put to death. Esther’s cousin, Mordecai, learned of the plot and urged Esther to intervene with the king, telling her, “Who knows whether you have attained royalty for such a time as this?”

Mordecai had earlier thwarted a plan to kill the king, so the king was familiar with him. When Esther pled her case to the king he had the perpetrator hanged on the gallows that the man had erected earlier for Mordecai.

Gideon was another Old Testament figure who found himself in a difficult situation. In his time Israel was under siege from a rival nation and Gideon felt that God had abandoned them. When an angel of the Lord visited Gideon and told him, “the Lord is with you,” Gideon objected, saying, “If the Lord is with us, why has all of this happened to us…the Lord has abandoned us.”

The Lord then told Gideon, “Go in this your strength and deliver Israel from the hand of Midian.” Gideon again objected, saying his family was the least in the land and he was the youngest in his family. “Surely I will be with you,” answered the Lord.

One of my favorite stories from the Old Testament is about three young men who exhibit incredible faith and courage. Shadrach, Meshach and Abednego were Israelites taken into captivity by Babylon. When faced with the option of bowing down to the gods of the king of Babylon or being thrown into a fiery furnace they refuse to bow. They told the king, “God whom we serve is able to deliver us from the furnace of blazing fire…but even if He does not…we are not going to serve your gods or worship the golden image.”

Jesus Himself found Himself in a mess as He faced the cross. In His prayer in the garden of Gethsemane He asks the Father that “if it is possible, let this cup pass from Me; yet not as I will, but as You will.”

Paul writes in Romans about facing difficult times, finding ourselves in a mess. He says, “We also exult in our tribulations, knowing that tribulation brings about perseverance; and perseverance, proven character; and proven character, hope; and hope does not disappoint, because the love of God has been poured out within our hearts through the Holy Spirit who was given to us.”

We are going to find ourselves in another fine mess and another and still another. Yet these difficult times and situations can be an opportunity to not only grow closer to God and stronger in our faith, but to demonstrate His love and power to a world sorely in need of hope.