With its themes of hope, redemption, joy, regret, innocence and the loss thereof, Christmas is ripe material for storytellers and movie makers. There have been scores of movies inspired by one aspect or another of Christmas. Many of them are highly forgettable. A few are classics.

I’ve published a list of “Top Ten Christmas Movies” several times. And this one borrows heavily from some of those previous lists, though there is one movie making its first appearance on my list this time around.

As always, there are some criteria that this list is based on. This is a list of movies, not television specials or Christmas themed episodes of TV series. And all of the movies on this list were originally released theatrically, that is, in a movie theater where people had to buy tickets to get in. And finally, Christmas is a central theme in all of these films, not simply a convenient plot device. Just because the story of a movie takes place around Christmas isn’t enough to get it on this list.

My list counts down from #10 to #1 with the year of its original theatrical release next to the title.

10. The Nativity Story (2006)
Starring Keisha Castle-Hughes as Mary and Oscar Isaac as Joseph, this is only the movie on my list that actually deals with the very first Christmas. It’s curious that there haven’t been more films devoted to that historic event. This particular version deals primarily with the discovery of Mary’s pregnancy and her journey with Joseph to Bethlehem where Jesus is born.

Castle-Hughes caused a minor scandal during the filming when she revealed that she was pregnant with her boyfriend’s child. The Nativity Story is the first film to ever premier at the Vatican. It opened in the U.S. on December 3, 2006. 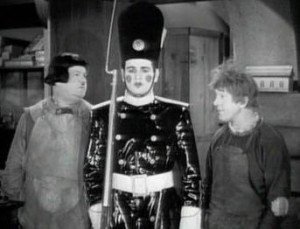 9. March of the Wooden Soldiers or Babes In Toyland (1934)
This vehicle for the comedy duo Laurel and Hardy was originally released in 1934 as Babes In Toyland. It was reissued in 1950 as March of the Wooden Soldiers. While not one of the best films made by Laurel and Hardy, its holiday theme has made it a perennial favorite on TV between Thanksgiving and Christmas.

Laurel and Hardy play Ollie Dee and Stanley Dum, employees in a toy factory who mistakenly take an order from Santa Claus for 100 wooden soldiers at six-feet high. The order was supposed to be for 600 soldiers at one-foot high. But the mistake saves the day as Silas Barnaby and his army of bogeymen attack Toyland. The film opened in the U.S. on December 14, 1934.

8. Scrooge (1970)
One of dozens of adaptations of Charles Dickens’ classic “A Christmas Carol,” Scrooge is a musical that stars Albert Finney in the title role. Sir Alec Guinness plays the ghost of Scrooge’s partner Jacob Marley. It opened in U.S. theaters on November 5, 1970. 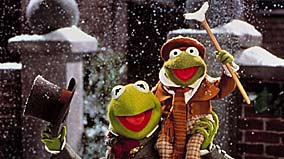 7. The Muppet Christmas Carol (1992)
Another musical version of Dickens’ “A Christmas Carol,” this one stars Michael Caine as Scrooge. Kermit the Frog is his hapless employee, Bob Cratchit. The Great Gonzo, as Charles Dickens, tells the story. It made its debut on December 11, 1992.

6. The Polar Express (2004)
The only animated film on my list, The Polar Express stars the voice and likeness of Tom Hanks in six roles, including Santa Claus. It’s the story of a young boy who is starting to question the existence of Santa Claus and the magical train ride he takes one Christmas Eve that restores his faith. The film had its general U.S. debut on November 10, 2004. 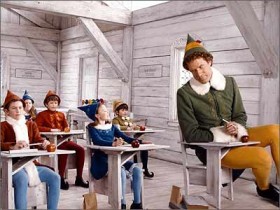 5. Elf (2003)
Making its debut on my list, this movie stars Will Ferrell as Buddy the Elf. But, as the story goes, Buddy really isn’t an elf. He’s a human who Santa, played by Ed Asner, rescued from an orphanage and brought back to the North Pole where he was raised as an elf. As Buddy grows it becomes painfully apparent by his size and lack of toy-making ability that he isn’t an elf. Buddy then sets off to New York City to find his real father, Walter, played by James Caan, a publisher who is on the “Naughty List.”

In New York Buddy’s sense of awe and innocence help Walter redeem himself. Buddy also meets and falls in love with Jovie, played by Zooey Deschanel. And Buddy saves Christmas while helping Santa escape from the Central Park Rangers. Also starring were Bob Newhart as Papa Elf and Mary Steenburgen as Walter’s wife Emily. Elf debuted in the U.S. on November 9, 2003. 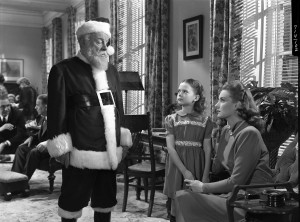 4. Miracle on 34th Street (1947)
Mauren O’Hara, Edmund Gwenn and a young Natalie Wood star in this classic. The movie opens on Thanksgiving at the Macy’s Thanksgiving Day Parade. Macy’s Santa turns up drunk, but luckily a bearded old man, Kris Kringle, with his own padding and Santa suit, happens by to save the parade.

Things get complicated when Kris claims to be the real Santa Claus. He faces a sanity hearing that’s set to end on Christmas Eve, just in time for Kris to make his annual deliveries. One of only two Christmas movies to make the American Film Institute’s “Top 100 Inspirational Movies Of All Time” (coming in at #9), Miracle on 34th Street debuted on May 4, 1947.

3. A Christmas Story (1983)
Starring Daren McGavin, Melinda Dillon and Peter Billingsley as Ralphie, A Christmas Story has become a classic due in large part to its day-long exhibition every Christmas on cable TV. Based on the story by Jean Shepherd, who contributed to the screenplay, it’s the tale of a young boy’s quest to get an official Red Ryder BB gun for Christmas, despite the belief by every adult in his life that he’ll shoot his eye out. It debuted on November 18, 1983.

2. It’s A Wonderful Life (1946)
Not an instant classic, the copyright on this film was actually allowed to lapse and it fell into the Public Domain in 1974. That meant that TV stations could air the movie for free, and it became a staple of holiday television marathons until Republic Pictures restored its copyright in 1993.

Jimmy Stewart stars as George Bailey, described by his nemesis, Mr. Potter, as a “warped, frustrated, young man.” George comes to the end of his rope on Christmas Eve and is about to jump off a bridge so his family can collect on his $5,000 life insurance policy. Angel Second Class (A-S2) Clarence comes to the rescue and shows George how much poorer a place the world would have been if he had never been born.

It’s A Wonderful Life also stars Donna Reed as Mary, George’s wife, and Lionel Barrymore as Potter. It was named #1 on the American Film Institute’s “Top 100 Inspirational Movies of All Time.” It debuted in New York City on December 20, 1946. 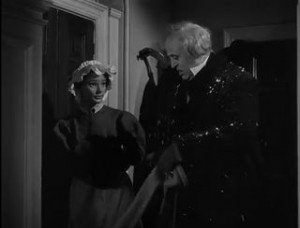 1. A Christmas Carol (1951)
Charles Dickens’ classic story of redemption and hope has been adapted for film since the 1920s. The 1951 version starring Alastair Sim as Ebenezer Scrooge is the best of them all. Released in the U.K. on Halloween 1951, A Christmas Carol made its U.S. debut on December 2, 1951.