The image of the road conjures up a vast variety of thoughts and emotions.  The Bible uses the road as both metaphor and setting for some key lessons.  There’s the road to Jericho where the parable of the Good Samaritan takes place.  Saul of Tarsus met Jesus on the road to Damascus and had both his name and life changed.  Cleopas and another anonymous disciple of Jesus were on the road to Emmaus when they were joined by a stranger shortly after the crucifixion and resurrection of Jesus.  The stranger was later revealed to be Jesus himself.

There’s often a sense of excitement when we set off on the road.  Even when we’re sure of where we’re headed there can be some uncertainty about what might happen along the way.  There could be disaster and redemption, such as was the case of the traveler set upon by bandits and rescued by the Good Samaritan.  Or like Saul/Paul an unexpected encounter could lead us to take an entirely different path.  And there are those trips who’s true significance is realized only once the journey is over, like that walk Cleopas and his friend took to Emmaus.

Sometimes the road itself proves as much fun as the destination.  Ask anyone who rides a motorcycle.

And when the road ends we we’re faced with a choice.  Turn around or blaze our own trail.  How you handle that one depends on who’s map you’re following. 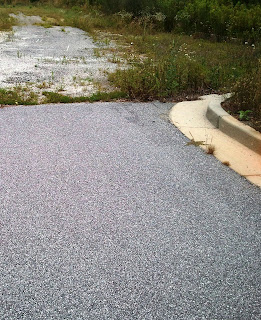