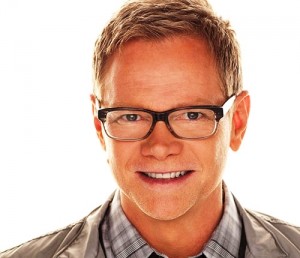 There’s so much to be said about Steven Curtis Chapman, and all of it is good, that it’s difficult to know where to begin. Due to a bizarre alignment of circumstances, I believe that Steven was aware of me before I became aware of him. I know. Looking at it from this side of the time-space continuum it’s practically unthinkable. Yet, to the best of my memory, it is true.

Steven was born and raised in Paducah, KY. His wife, Mary Beth is from (if memory serves) Cincinnati, OH. The two met while attending Anderson University in Anderson, IN. They shared a mailbox because Mary Beth’s maiden name is Chapman. They were married on October 14, 1984. Around that time the couple moved to Nashville, TN so Steven could pursue his music career. On their trips to visit Mary Beth’s family in Ohio they would pass through Louisville, KY and listen to what was then WXLN radio,  a Christian station where I worked from 1983 – 1988. And that’s how Steven discovered me before I (and the rest of the known world) discovered him.

Sparrow Records signed Steven and released his first album, First Hand, in 1987. The combination of fast-talking poorly-enunciating djs and the cover art for the album led to a little confusion early on. For a couple of months many people thought that the duo Steve And Curtis Chapman had released an album entitled No Cars On Pier. But as the first single, Weak Days, stormed up the Christian radio charts, the confusion soon disappeared.

Early on I realized that Steven was not simply another artist hoping to make it big, but a genuine, humble, and extraordinarily talented young man of faith.  Late in 1987 I received a personal letter from him, thanking me for playing his music on the radio.

I took a job doing the morning show at WLIX on Long Island, NY in 1988. The station partnered with a local church, Smithtown Gospel Tabernacle, to produce a series of free concerts for a number of years. Between late 1988 and early 1990 Steven performed at our Family Concert Series twice. After his appearance at the series in March 1990 I took him and his one-man road crew along with my then 10-year-old son Caleb out to eat. I offered to take Steven anywhere he wanted to go. “Dunkin’ Donuts sounds good,” he said. “Dunkin’ Donuts? Are you sure?” I asked. “Yeah, they have soup,” he replied. So we drove to Dunkin’s Donuts, right across the street from the hospital where my wife Teri and our newborn daughter Kelsey were sleeping.

That got us talking about kids and family.  Steven and Mary Beth would go on to have three kids of their own and adopt three more. Adoption has become a mission for the Chapmans. They founded the non-profit organization, Show Hope (originally named Shaohannah’s Hope, after their first adopted daughter) in 2003. The organization’s mission is to engage the church to care for orphans and reduce the barriers to adoption. You can find out more about Show Hope here.

Since that hearty dinner of Dunkin’ Donuts soup I’ve had the privilege of many more meals and conversations with Steven. I’ve gotten to know Mary Beth, and I count both of them as friends. Get a Christmas card just about every year from them, though it’s been way too long since I’ve seen either of them. There are many stories I could share, accolades I could enumerate (like his 7,892 Dove and Grammy awards) but I’m trying to be mindful of the attention span of Internet blog readers (not YOU, but all of those other people who are even now itching to hit the scroll bar and get to the video already).

I hesitated about including Steven in this Throwback Thursday series. Most of the other artists I’ve featured here are, let’s face it (and how do I put this as tactfully as possible?), not nearly as visible in the music world as they once were. But Steven’s still cranking out the hits. I’m listening to the radio as I write this and over the course of those few hours I’ve heard two of his recent songs and zero from all of the other Throwback Thursday artists combined. That says quite a bit.

So on to the video already. I would have liked to have featured something from one of Steven’s earlier projects, like Weak Days from No Cars On Pier, or rather First Hand, or even the love song I Will Be Here from the 1989 project More To This Life, but I couldn’t find videos for anything prior to the title track of the 1992 release The Great Adventure. I remember seeing this video for the first time, and how good it seemed. It still holds up (well except for maybe the wardrobe, and the hair), as does the song. Look for cameos by Mary Beth and Sparrow president Bill Hearn.

Steven’s website is full of tour and other info. Check it out here.