Sheila and Mike have been hosting the mornig show at J93.3 for about a year and a half.  Mike’s last day was Thursday, February 10, 2011.  He can’t say where he’s going.  Some of us suspect he’s entering the witness protection program, but that’s purely speculation.  Wherever he winds up we pray the Lord’s best for him and his family.  Mike is a great talent and will be missed.

Sheila has been valiantly fighting cancer and still managing to let her light shine and showing up at 5:30 AM.  You can follow Sheila’s blog here.  Sheila and I hosted the morning show at J93.3 back in 1999 till about 2003.  Before that we worked together at a radio station in Louisville, Kentucky.  I’m looking forward to getting to work with her again.

We have quite a lot of good stuff in the works at J93.3.  Of course there’s the music.  But the difference in J93.3 only begins with the music.  We’re wrapping up our 16th Annual Hearts for Kids, where listeners bring Valentines cards for kids who live in children’s homes in the Atlanta area.  Every year we get hundreds of thousands of cards for these precious little ones.  I’ve been privileged to watch some of them open these cards and it’s priceless.  I’m still amazed at how something so simple can make such a difference in a life when you’re open to God’s leading. 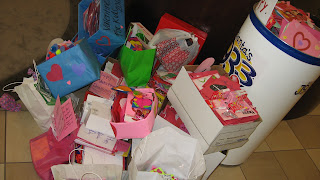 Just some of the cards collected this year.
I’ll be using this space to share some of the ways God moves in my life, and how He can move in your life as well.  I welcome your comments.  And hope you’ll listen, either on your radio, online or through a smart phone app.﻿