The giving of gifts as a means of celebrating Christmas is perhaps the central tradition of Christmas, but it hasn’t always been so. It wasn’t until the late 1700s that gift-giving at Christmas became wide-spread. Tradition holds that it springs from the gifts; gold, frankincense and myrrh, presented to the baby Jesus by the wise men.

By 1820 retailers had come to the realization that Christmas gift-giving was a potential gold mine for them and began placing Christmas ads in newspapers. By the 1840s Santa was employed to entice shoppers into stores. New York City’s Macy’s department store stayed open until midnight on Christmas Eve 1867 to take advantage of last minute shoppers. Today, the weeks between Thanksgiving and Christmas are the “make or break” season for businesses around the world.

There is more to this tradition of exchanging presents at Christmas than the mere economic impact. It presents us with an opportunity to demonstrate our love for those to whom we give gifts. The older I get the more I enjoy choosing and giving gifts to family and friends. Don’t get me wrong, I still look forward to receiving gifts, but I like giving them more. 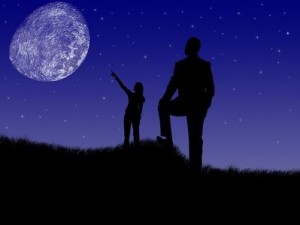 Every year I collect lists of things the people I buy for would like to receive. But I always try to throw one item not on the list in there. Something that the person wouldn’t buy for themselves, or even think of for themselves. One year I bought my wife, Teri, a telescope. (I hear you chuckling, “How romantic,” you’re thinking.) But it turned out to be one of her favorite Christmas gifts. Partly because it was unique, something she would have never considered on her own. Partly because it opened up a whole new world of discovery of the marvels of God’s creation beyond this blue sphere we inhabit. And partly because it came from me, after a great deal of thought.

Not that there’s anything wrong with practical gifts or with sticking with someone’s wish list. But, at least occasionally, I enjoy giving something that takes a little time and creativity as well as cash or other resources.

Who among us would have ever thought to ask for a little baby, born in a manger? God’s greatest gift to us is that unique gift that none of us knew we wanted, yet every single one of us is in dire need of. And talk about planning. That one gift was centuries in the making, but the giver knew all along that He would present it to us on that very first Christmas.