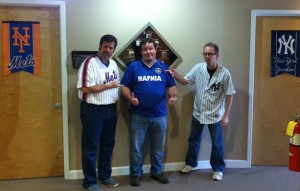 Guys hijack “official” days for their own purposes, whether by design or out of ignorance. Today, May 29, 2015, is Major League Baseball Jersey Day. So my co-worker, Rob Langer, and I showed up sporting our official MLB team jerseys, Rob in a Mets jersey and me in a Yankees jersey.

Then another co-worker, Benji Shepherd, arrived. He was wearing an Everton jersey. Everton is a soccer team in England! Not only was Benji supporting the wrong sport (and the wrong country!) but when he turned around he revealed that his jersey wasn’t even official, it had his name on it! 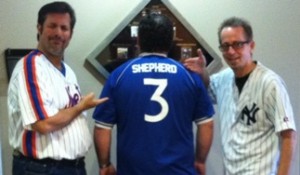 Sometimes conformity can be a good thing, sometimes. Benji has yet to come to a full appreciation of that fact.