There is no good news here. Only news of the darkest, most dire variety. While technically it may not be the worst news one could receive, the difference is so excruciatingly small as to render it petty.

For those of us prone to looking for the bright side, the knee jerk reaction may be, “Well, if you have to have cancer you could certainly do worse than breast cancer. The survival rate is ninety-something percent. Yes, if you had to choose a cancer to have, breast cancer would be about the best one.”

First, the words “best” and “cancer” should never appear in the same paragraph, forget the same sentence. The two concepts are so far removed from one another that to place them in such proximity is enough to make a logical person’s brain explode. 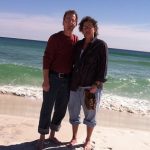 You mean well, I realize that. But at this early stage it’s quite difficult to hear that, to hear anything. The horror of this news is so consuming in the first few hours of receiving it that no intention, good or otherwise, can cut through it.

No, there is no good news here. Only varying degrees of bad to worse.

“Though He slay me, I will hope in Him. Nevertheless I will argue my ways before Him.”

“This I recall to my mind, therefore I have hope. The Lord’s lovingkindnesses indeed never cease, for His compassions are new every morning; great is Your faithfulness.”

There is hope. Surely, there must be hope.

February 15, 2017 Day One:
Twenty minutes into the 30-minute ride to work with my daughter Kelsey, my phone rang. It was Teri.

We arrived at work and shared the news. I was immediately sent home. Kelsey followed minutes later. We spent the rest of the morning doing what I imagine we will be doing quite a bit of in the coming months; hugging a lot, crying a little and waiting.

The nurse called back with more details on the initial results of the biopsy Teri had undergone just two days before. The tumors were small and we had caught it early. In what I hope will be a short time I’ll be able to say that’s the good news. For now let’s call it the news that’s not quite as dreadful as the rest of the news.

This nurse will serve as Teri’s navigator through the upcoming process. She will walk Teri through the entire morbid journey of meeting with doctors and weighing options and deciding on and enduring treatment. We are to meet with a team of doctors on Friday the twenty-fourth, or Day Ten. They will lay out those possible courses of treatment and we will move on from there.

Early that evening our son Caleb and his wife Brandi and their three boys came by. Toby, who will be 13 in March, was stoic and hugged Teri firmly. Travis, 8, has never been able to hide his emotions and his eyes were already red and tear-filled. Trenton, who is two, gave Grandma a sweet hug.

That night, when it was just the two of us once more, Teri said she felt like she was in shock. She didn’t sleep very well. By nature she worries, and she has never had this much cause to do so before.

So this terrible journey has begun. One I had never imagined we would undertake. But now there is no other choice. So we cling to one another, to family, friends and to the hope we know, despite the circumstance and how we may feel at the moment, never disappoints.

“For you are my hope; O Lord God, you are my confidence from my youth.”