Did you ever get the feeling that no one was paying attention to you? You’re talking, but nobody is listening. It can be pretty frustrating. Parents get that feeling once in a while. So did the prophets of the Old Testament. 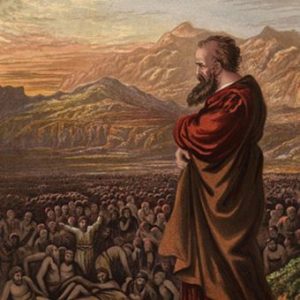 Ezekiel was specifically told by God that the people might very well not listen to what he was to say to them. But that was no reason to quit speaking.

Ezekiel may have thought, understandably, “What’s the point? If they’re not going to listen, why should I waste my breath?” But the point, at least as far as Ezekiel was to be concerned, was not whether they listened, but that he obeyed God.

For the people of Israel, in captivity for much of Ezekiel’s tenure as a prophet, the point was that, “they will know that a prophet has been among them.”

I’m fascinated with the lives of the Old Testament prophets. On the one hand they had a very special relationship with God. Many of them hear His voice audibly. Some of them had vivid dreams and visions. None of them had it easy.

Yet they persevered. Hebrews chapter 11 tells us that, “they were stoned, they were sawn in two, they were tempted, they were put to death with the sword,” and the list of ill treatment goes on until the writer of Hebrews says, “And all of these, having gained approval through their faith, did not receive what was promised, because God had provided something better for us, sol that apart from us they would not be made perfect.”

If we can take away anything from the calling of Ezekiel and his life, it’s that our fulfillment comes in obeying what God has instructed us to do. In these few verses from Ezekiel chapter 2 we see only the beginning of what God would accomplish through the prophet. There was much more to come. And through it all Ezekiel found his strength and joy in his obedience to God’s call on his life.