Sometimes I think that I should never be surprised by the ways God works and the things He chooses to use to accomplish His purpose.  After all, if He could open the mouth of a donkey to reprimand a wayward prophet (see the story of Balaam in Numbers chapter 22) then I shouldn’t be amazed (or so I tell myself) when He uses a pizza or a fishing trip to work in someone’s life. 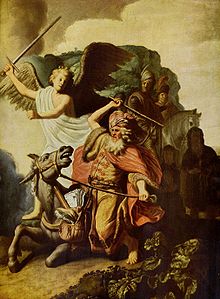 Balaam, his donkey and the angel of the Lord.
About 10 years ago we did a contest called “The Street of the Day.”  Every day we’d announce the name of a particular street somewhere in our listening area.  If you happened to live on that street you could get a free pizza.  That was pretty much the extent of the contest.  You didn’t have to register or perform any kind of zany stunt.  You just had to live on the street we picked that day and you could get a free pizza.  Of course you had to listen to us on the radio to hear the name of the street.  Not the biggest prize we’ve ever given away.  I admit I wasn’t crazy about this contest.  It wasn’t terrible, but it really wasn’t the type of flashy big ticket kind of thing we were so fond of doing back then.
Then the amazing happened.  I took a phone call in the studio from a lady who was on the verge of tears, but the good kind, happy, joyful, thankful tears.  She had been in the car worrying how she was going to feed her kids that day.  Times had been rather tough for her, the money was about gone and she was nearing the end of her rope.  She happened to be listening to us when we called out the “Street of the Day.”  Yeah.  She lived on that street.
Now if you have an ounce of cynic in you, I know what you’re thinking–cause I have about a pound of it in me.  How much difference could one pizza possibly make?  Well, to this lady, quite a bit.  For her it was much more than a pizza and something much closer to the miraculous than to happenstance that her street happened to be chosen that day.  For her it was an answer to prayer and a reason to hang on to hope.  By the time she was done talking we were both crying.  As I retold her story to other staff members later in the day there were more tears and a sense of awe at how God had taken something we believed to be so trivial and used it to accomplish His will and demonstrate His love.
Right now we’re doing another contest.  This one is “The Summer To Remember.”  We have a couple of different prize packages we’re giving away.  All listeners need to do is go to our website (shameless plug here–j933.com–) and register.  Every couple of weeks we do a random drawing and then start registering people for the next prize package.  Pretty simple.  Our first prize package was a fishing trip for a dad and his kid with a B.A.S.S. fishing pro.  Nice prize package if you fish.
We drew the winning entry and then tracked him down on the phone.  The winner was a 12-year-old young man named Colt.  His mom and dad had divorced about three years ago.  So now Colt usually only sees his dad on the weekend.  Oh, Colt has three younger sisters and all four them spend the weekend with their dad together.  That leaves precious little opportunity for Colt and his dad, Steve, to have any one-on-one guy time.  I’ve talked with Colt once or twice and had the good fortune to get to meet him in person.  He’s a fine young man.  But if you know anything about 12-year-old boys, even the fine ones like Colt, then you know they need, on occasion, the undivided attention of their father.
When we told Colt that he’d won he said, “I’ve been asking my dad to take me fishing for weeks, and now this…this is amazing.  Thank you so much.”
Colt and his dad and his sisters were at the studio with me this morning, helping announce the winner of the latest prize package in “The Summer To Remember.”  Both Colt and his dad had a great time on the fishing trip.  Colt caught over a dozen fish and had a day alone with his dad that he’ll always remember. 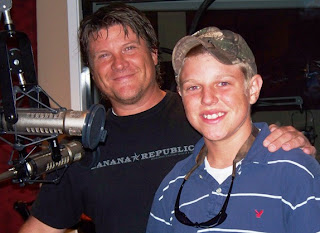 Steve and Colt Dooley
And once again, there’s that sense of awe.  You’d think I’d expect this kind of thing by now.  But maybe it’s good that I can still be amazed by God’s mysterious ways, so much higher than our own ways.  This kind of thing is what makes ministry so rewarding.  Hearing the quiver of in a voice about to break from sheer joy.  Seeing the smiles on the faces of a father and son who love one another.  And what awes me the most is that God is so merciful that He allows us to play a part in how He accomplishes these things.