It seems like just last week that I was sitting down to write a post for the new year. Of course, in that case the new year was 2014. And that post was about four words I wanted to use more often. Even though it feels so recent, when I go back and read that entry it seems like a decade has gone by. Time is funny that way.

I started 2014 doing the afternoon show at The JOY FM Atlanta with Shannon Steele, Monday through Friday, 3 PM till 7 PM. We called the show Prevenings, that ambiguous time of day between afternoon and evening. We'd been doing the show together since December of 2011. Shannon left in March.

In April I swapped time slots with Jayar and started doing the mid day show, Monday through Friday 10 AM till 3 PM. That's been getting me home in time to eat dinner with my wife Teri, and catch all of Jeopardy on TV, so it's turned out to be a good deal.

Of course there has been quite a bit more to 2014 than a change in my work schedule. My third grandson, Trenton, was born in May. That was the biggest event of the year. Second to that, and at the extreme other end of the emotional scale, was the death of my daughter-in-law's father, just a short time after the birth of Trenton. I spoke at his memorial service, one of the most difficult things I've had to do in public.

Top App Of 2014
Selfie: It's sort of like Twitter, but with video. Each video post can be as long as about 20 seconds. you can tag people, follow people and like other peoples' selfies. Look for me if you download it, my user name is @Jerry. Oh, and it's free. Check it out here. 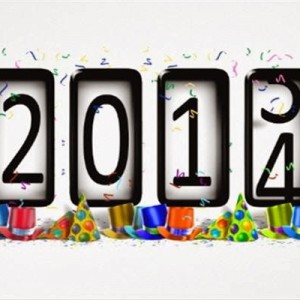 The rest of the year included events and occasions somewhere in between those two on that sliding scale of emotions I just mentioned. My mom and dad visited from Ohio for about a week. My sister and her family spent a few days with us on their way to somewhere else, and I finally got to take my nephew on his first motorcycle ride. My brother and his brood also rolled through on their way to visit a school in Florida that his oldest son was considering. It was kind of like a mini family reunion spread out over a few summer weeks and done in shifts.

It's been a good year. Through my work at The JOY FM I've been able to share a lot with other people. That sharing included things like collecting turkeys for needy families, shoes for orphaned kids in Africa and praying with and for people on a daily basis. Not everything I shared was of such a serious nature. There were funny videos and stories, favorite new apps and recommendations for people worth following on Twitter (see sidebar).

I hope you had as enjoyable a 2014 as I did, and that as you face 2015 you do so with the same sense of hope and expectation that I have for the new year. Happy New Year!