I fancy myself a logical guy. Rational. A thinking man. That’s especially true when it comes to the expenditure of resources; money, effort, and that most precious of resources, time. I like to know that what I choose to spend those resources on is not merely a good choice, but the best choice.

Sometimes those choices are relatively simple. You need to put gas in your car. There are two gas stations right next to each other. The price for a gallon of gas at the first is $2.15 and at the second it’s $2.19. No brainer, you buy your fuel from the station with the lowest price. (This is a real life example. I pass by two such gas stations every day on my way to work. I still can’t figure out why anyone would buy their gas at the station with the higher price, but that’s a topic for another day.)

Many choices are not so clear cut. And for too many of us, we don’t even know AFTER we’ve made a decision whether or not it was a good one, let alone the best one. That’s because, I believe, many of us don’t think about what we hope to accomplish by making those decisions. In our earlier gas station example it seems pretty obvious; the goal is to get gas into your car so you can get wherever it is you’re going. By buying the gas at the cheapest price you’ve accomplished the goal with the minimum expenditure of resources. That choice didn’t require much thought, you didn’t even have to employ any higher math skills.

As people of faith we realize that every resource at our disposal is a gift from God. When we keep that fact in mind, then how we spend those resources takes on a spiritual element as well as financial or time management aspect. The Bible talks a great deal about stewardship, counting the cost, to whom much is given much is required and the like. We are to use the resources God has given us wisely and effectively.

But how do we know if our use has been effective or wise if we don’t first understand what we hope to accomplish through that use, if we don’t count the cost or have a clearly stated goal? I have seen many companies do things that seemed like a good idea without first asking if that idea would help them realize their ultimate goal. And after that “good idea” had been put into practice they didn’t go back and measure whether or not they were closer to the goal because of it. In most cases, not only were they not any closer to accomplishing the ultimate goal, but because they had spent resources on an idea that didn’t get them closer they were actually further away from it with fewer resources.

That’s the thing about money, effort and especially time. You can only spend them once. Spend too much of any of those resources on things that don’t get you closer to the goal and you’ll eventually find yourself failing to accomplish that goal with no resources left for another shot at it. That’s why I’m a proponent of setting goals which are measurable, and weighing every potential expenditure, every activity, every opportunity against how much closer it will get you to your goal. 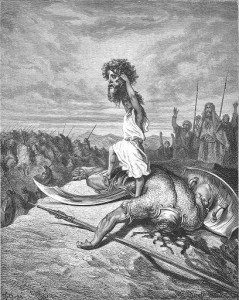 God has this way of working that often seems counter intuitive, even nonsensical at times. The Bible is full of examples of God working in ways that at first glance seem to fly in the face of the desired goal. How many times have you read stories about a little shepherd boy defeating a giant with a leather strap and five stones, lepers being cleansed from their disease by bathing in a filthy river, a young man being sold into slavery by his brothers so that he would be in a position to later save those same brothers? And after reading stories like those, how many times have you thought, “That never should have worked.”?

Sometimes God is going to tell you that the best way to reach a goal is by doing something that seems like it has no chance of working. Like the instruction God gave to the prophet Ezekiel:

But you shall speak My words to them whether they listen or not, for they are rebellious. (Ezekiel 2:7 NASB)

Seems like a potential waste of Ezekiel’s time, speaking to people who very likely were not going to listen. And getting people to listen, well isn’t that one of the primary goals of a prophet? Sometimes God will want us to do things to help us see that we’ve set the wrong goal. In Ezekiel’s case God had stated the goal a few verses before:

I am sending you to them who are stubborn and obstinate children, and you shall say to them, ‘Thus says the Lord God.’ As for them, whether they listen or not, for they are a rebellious house, they will know that a prophet has been among them. (Ezekiel 2:4-5 NASB)

The main purpose for Ezekiel speaking, in this instance at least, was so that the people would know that God had sent a prophet to them. Their listening to the prophet was almost beside the point, at least as far as Ezekiel was concerned. He was to speak. The listening or not listening was between God and the people. But if they chose not to listen they were without excuse, for they would know that a prophet had been among them.

God always has a purpose, a goal. Even in that first scripture reference I shared to open this post, God has a reason. More than just shaming or confounding the wisdom of this world by using the foolish things of this world. His purpose there is:

So that no man may boast before God. But by His doing you are in Christ Jesus, who became to us wisdom from God, and righteousness and sanctification, and redemption, so that, just as it is written, ‘Let him who boasts, boast in the Lord.’ (1 Corinthians 1:29-31 NASB)

So let’s set our goals, count the cost and measure our opportunities and how we spend our resources against those goals. All the while remaining open to those rare instances when God will instruct us to take an action that seems contrary to reaching our goal so that He will receive the greater glory when we do realize that ultimate goal.