It was the greatest single event the world had ever seen (at least up until that time, the Resurrection of Jesus, arguably, may have eclipsed His birth in importance, but His birth was necessary for the Resurrection to be possible). So important that all of time itself would be divided into two eras, the time before and after this event, the birth of Jesus, God taking on the form of man. That makes the announcement of this event, or rather, the first to hear the announcement, even more surprising. Aside from the principal players in the story, Mary and Joseph and, perhaps, members of their families (certainly Mary’s cousin Elizabeth the mother of John the Baptist knew what was coming) the first to learn of the birth of Jesus were two groups of men who were very different. Though they did have something in common; no one in Israel at that time would have guessed that a group of shepherds or wise men from foreign lands to the East would have been the first to be told of the birth of the Messiah. 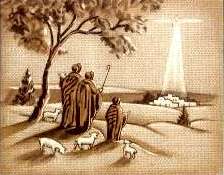 The shepherds were working men who spent much of their time outdoors on the outskirts of towns and villages or in the wilderness where their flocks could graze and find water. While not outcasts, they did, as a matter of occupational necessity, live on the edges of society. Not the type of social elite one would expect to be among the first to learn of the birth of a new king.

The magi, or wise men, had more social prestige than the shepherds. They may not have been royalty, but they probably associated with the ruling class of their native lands, perhaps serving as advisors. But their being non-Jewish and thereby heathens made their being privy to this news even more surprising.

How these two groups came upon the news of the birth of Jesus was also different. The shepherds were simply going about their business, minding their flocks outside of Bethlehem when an angel appeared to them and told them of Jesus’ birth. The magi had learned of the birth of Jesus through their study of the stars (and perhaps the Hebrew scriptures). Regardless of how they learned the news, both groups reacted the same. They went to Bethlehem to see for themselves. And having seen with their own eyes, they worshiped the newborn king, praising God for allowing them to hear this good news. And then they went on their way, sharing all that they had heard and seen.

While we often include both groups in our depictions of that first Christmas and the Nativity scene, the chances are that the shepherds and magi never met. The shepherds were told of Jesus’ birth on the very night that it happened and hurried into Bethlehem to see the baby in the stable. The magi, Matthew tells us, visited Jesus “in the house.” Some speculate that it could have been as long as two years after that first Christmas. So we’re not really sure exactly when the wise men began their journey, following the star to Israel and eventually to Bethlehem.

These two very different groups of men provide us with some truths and lessons that we can apply to our own lives. First, God will reveal Himself. Sometimes that revelation comes through our seeking Him and sometimes it jumps out at us when we least expect it. Second, when confronted by God our response is (or should be) to praise and worship and Him. And finally, we are to share the news of God’s revelation.