I have a special place in my heart for all things New York, or at least most things greater NYC area. Especially north Jersey and Long Island. And, being born in Bay Shore and growing up in East Islip (both on the Island), earns Margaret Becker a solid position in that special place.

Margaret left the Island for Nashville around 1986, signed a songwriter deal with Sparrow records and then, in 1987, released her first solo project, Never For Nothing. I moved to the Island in 1988, so it was several years before I met her. And since she made her home in Nashville, I didn’t see her very often. But when I did I found her genuine, funny, and sometimes intense (she is from Long Island).

From that first release in 1987 through the 1999 project What Kind Of Love, Margaret had 20+ #1 radio hits, won four Dove Awards and was nominated for another 13, and had four Grammy nominations. She released 11 CDs with Sparrow, including a best of (the 1992 Steps Of Faith, on the strength of her first four studio projects), a Spanish language project, Fiel A Ti in 1995, and the 1994 collaboration with Susan Ashton and Christine Dente (the trio was billed as Ashton-Becker-Dente), Along The Road. Since leaving Sparrow she’s stayed busy, writing a book, continuing to record, touring, speaking. More info on what Maggie’s been up to is on her website.

Of all of the radio promotions I’ve ever done, Margaret was at the heart of one of my favorites. Or at least one of her projects was. In 1989 she released Immigrant’s Daughter (it included the radio hits The Hunger Stays, Stay Close To Me, and Solomon’s Shoes). Since I was doing radio on Long Island at the time, and Margaret was a hometown artist, we played off of the CD title and took a couple of listeners to the Statue of Liberty. 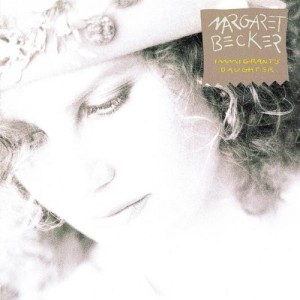 I couldn’t find many concept videos from Margaret. But she did one of the song Deep Calling Deep (one of my favorite Maggie tunes). So here it is, from the 1995 CD Grace.