I have never really known want.  Sure, there have been times that have been more prosperous than others.  And I have occasionally had to go without certain near essentials.  But I’ve never actually worried about where my next meal was coming from.  So my habit of stashing away foodstuffs is somewhat of a mystery to me.  Maybe it’s something that rubbed off on me from having both of my parents being raised during the Great Depression.  Or perhaps the story of Joseph and his famine fighting grain storage plan had a bigger impact on me than I realize.

No matter the origin, there have been times when I’ve stockpiled various snack foods.  Today’s photo was inspired by that habit and by a photo Matt Fields, The Morning Cruise producer, posted of one of his desk drawers.  Here’s my photo for the day. 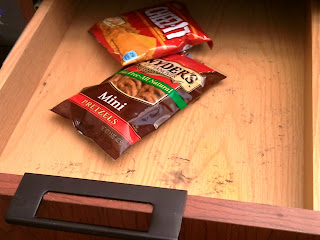