In keeping with the spirit of the last post on Vacation Memories, today I thought I’d share some of the games we used to play in the car to help pass the time.  As a parent I’ve employed some of these games on long road trips with my kids, when they were much younger of course, and look forward to playing them with my grandsons.

Let me first paint the picture of the typical Williams family vacation when I was kid.  We’d pile Mom and Dad, three kids and a dog into the ’63 Rambler. 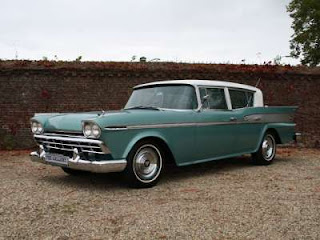 A close approximation of the Williams family Rambler
﻿

Nine hours, 400 miles and seven tunnels on the Pennsylvania Turnpike lay between us and our destination.  Remember now, this was before FM radios were standard in automobiles so all we had was an AM radio with one speaker.  It was before iPods, the Walkman; even before cassette tapes.  (I did have a little AM transistor radio with one of those hard plastic single ear earphones.)  Summer heat and no air conditioning in the car.  We were barely on the Garden State Parkway before the “Mom, he’s on my side of the seat,” ruckus would begin in the back seat.  So we played games to pass the time and keep the peace.

Car Colors:  Easy game, especially when we were younger and not all of us were of reading age.  We would each choose a color and then count the number of cars on the highway that were our color.

The License Plate Game: Everyone tries to spot as many different state license plates as possible.  Once a state has been spotted and claimed by someone no one else can claim it.  Extra points for foreign plates.  Alternately you can play as a family unit and simply try to spot one plate from every state.

The Alphabet Game:  The object of this game is to be the first person in the car to complete the alphabet by “claiming” words on billboards or road signs that begin with each letter of the alphabet.  You have to go in order and can only claim words that begin with the letter you need.  So around here you’d hope to see a sign for “Atlanta” to get you started.  Then you’d want to see something like “Birmingham” and so on.  We didn’t allow letters from license plates unless it was the state name or a vanity plate that spelled out an actual word (though back when I was a kid there weren’t vanity plates).  You couldn’t claim words that were inside your own car and the game was paused during rest stops whenever you got out of the car.

Who Can Keep Quiet The Longest:  When we’d tired of all the other games Dad would revert to this old “game”.  To be effective there really needs to be some sort of prize.

The Jujube Game:  When even the “Who Can Keep Quiet The Longest” game didn’t work, Dad (and I have to admit that I’ve used this tactic a few times myself) would pull out a box of Jujbes or other chewy candy and give each of us a mouthful.  Very tough to argue with your siblings with a mouth full of Jujubes.