I was maybe seven or eight.  We were living in New Jersey and shopping at Two Guys, a department store chain that went out of business in the ’80s.

Two Guys department store, a pretty big deal back in the 60s and 70s in north Jersey and greater NYC.

Somehow I got seperated from my parents.  I turned down aisle after aisle and couldn’t find them.  I started running, and remember some corny music playing over the PA system that made me say out loud, “Great music to play when you’re lost!”

One of the employees must have noticed my distress.  He came over to me and asked if I was lost.  No, I thought, I always run around department stores like a maniace, crying my eyes out.  “Yes,” is what I uttered.  A few minutes later that corny music was interupted by an announcement, “We have a little lost boy…”  Within a couple of minutes I was joyfully reunited with my family.

Being lost like that is one of the worst feelings I’ve ever experienced.  Losing someone ranks right up there too.  Many years after my Two Guys adventure, after I’d gotten married and had a son of my own I was again shopping.  This time at a mall on Long Island.  My wife and I were in different sections of a store, each believing our son was with the other parent.  When we came back together and realized that neither of us had Caleb, panic set in.  I don’t think I’ve ever run faster, up and down that entire mall, twice.  What seemed like an hour later, though it was probably five minutes at most, Caleb, around three at the time, came wandering out of another store.  That initial panic was replaced by relief and joy. 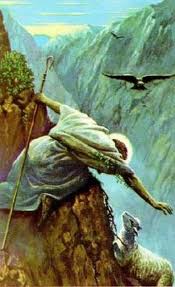 The Lost Sheep, the first of three “lost” parables of Jesus from Luke chapter 15
Whether﻿ we realize it or not, we’ve all been lost.  Some of us still are.  The sad part is that many folks don’t even know they’re lost.  But there’s someone looking for them nonetheless.  It’s easy to look down on the lost once you yourself have been found.  That panic of seperation fades pretty quickly once you’ve been safely reunited with those who have been looking for you.  Remember how the older brother reacted to his younger sibling in Jesus’ parable of the Prodigal Son.
The Lost Son, or Prodigal Son, is the third of three parables about things lost and found that Jesus tells in Luke chapter 15.  Jesus knows what it feels like to lose someone, and He knows the joy of finding us again.  And the truly amazing thing is that He allows us to share in that joy of “finding” the lost.