It was this past Friday, June 17, 2011.  I was sitting in the J93.3 tent at Atlanta Fest.  The rain had come and gone and thousands of people were making their way back to the main stage area, waiting for the music to begin again. 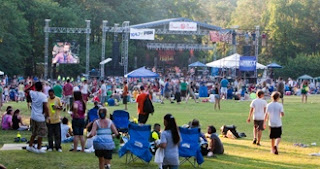 I was intrigued by the diversity of the crowd.  (Not so much the diversity as it pertained to ethnicity, cause for an event in a place as ethnically diverse as Atlanta this one was pretty homogenized, but that may be a subject for another post.)  There were people of every shape and size.  Some had obviously gone to great lengths to perfect their “look” while others, well others made me wonder if they even owned a mirror.  Every age was represented.  There were families, older couples, younger couples, single parents with the kids for a special weekend, and groups of teenagers and twenty-somethings.
As I thought about how different all these people were I also pondered the things that they had in common, beyond being in the same place at the same time.  The first two things are so closely related as to be nearly indistinguishable:
1. God loves them.
2. Jesus died for them.
And the next two are corollaries of the first two:
3. Not one of them could do anything to make God love them any less.
4. Not one of them could do anything to make God love them any more.
These things are true not only of those who were at Atlanta Fest this past week, but of every person who has or will ever walk this earth.  God’s love for us is not dependent on us.  It is totally dependent on God.  No matter what you look like, what you’ve done or what you want to do, God loves you.  And the level or intensity of that love will not change, no matter what you say or do, because God’s love is based on who God is, not who you are.  And since God will not change, neither will His love for you.
I’ve heard it said that God’s nature is love.  I’m not sure I totally buy that, at least not the way I understand the use of the term “nature”.  It’s a fish’s nature to swim, a bird’s nature to fly.  They can’t help it.  And to say that God “can’t help but love you”  seems, in my thinking, to render Him less than god-like.  If God “has” to do something, if He has no choice in the matter, then that something He has to do isn’t really so special after all.  And if God is subject to anything, even His own nature, how then can He be God?
I love the line from the Humphrey Bogart movie “The African Queen”.  Bogey plays gin-soaked river boat captain Charlie Allnut, who is taking missionary Rose Sayer, played by Katharine Hepburn, down a river in Africa to escape the Germans during World War I.  At one point Rose verbally objects to Charlie’s drinking, and Charlie says, “A man takes a drop too much once in a while, it’s only human nature.”  Rose responds with, “Nature, Mr. Allnut, is what we are put in this world to rise above.” 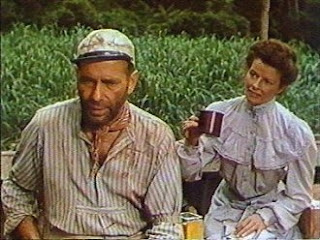 So I’m not too sure about limiting the miracle of God’s love for us by calling it His “nature”.  I think God made the conscious decision, the willful choice to love us.  He didn’t “have” to love us, but He chose to anyway.  And, in the words of the apostle Paul, “God demonstrates His own love for us in this:  While we were still sinners, Christ died for us.”  (Romans 5:8)
Since God’s love is based on who God is and not who we are, we have great hope and security in that love.  Nothing we do can change that love or cause us to lose it.  Once we realize that it begins to free us to love as God loves, with a love that is not based on those we love but on the One who loves us.