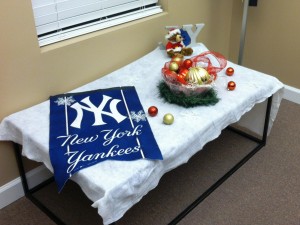 Two seasons, baseball and Christmas. The only two that matter. Baseball, life as it is. Christmas, life as it can be through a relationship with Jesus. I love each of those two seasons. When one of them ends, the other begins. Such is the case today, Thursday, October 30, 2014. The day after game 7 of the 2014 World Series. The Giants took the series by defeating the Royals in Kansas City, 3 – 2. And so today begins the Christmas season.

I’ve been preaching the Two Season Philosophy for decades, actually wrote it. And it appears that it’s actually paying off. This morning I was greeted by the most pleasant of surprises when I arrived at work. I’m filling in this week for Rob Langer, producing the Atlanta end of The Morning Cruise on The JOY FM, so I’m getting to the station around 5:30 am. When I got down the hall to my office and flipped on the lights I was suddenly transported into a winter wonderland. Rob and his wife Nancy had come in the night before and decorated my office for this first day of the 2014 Christmas season!

That Rob and Nancy would go through all of the trouble to do something so thoughtful speaks volumes about the type of people they are. That they would do it while Rob was on vacation, amazing. I can’t thank them enough.

I was so touched that I shot some video, just to be able to capture a little of the wonderland that is now my office. Hope you enjoy it. And let me be the first to wish you a merry Christmas!